Thank goodness for Christmas. I'm anticipating a delightful holiday with my son, Jamie, his wife Mel, my two granddaughters, Maddie and Edie, and Mel's parents and brother. It will be joyous and happy, and Jamie even said no promises but he's looking into taking everyone to a Christmas Eve service--he told me once it was one of his fondest childhood memories, and I told him he could have fooled me because he usually behaved badly (he said he liked the memory because of the anticipation of gifts that went with it). I like going to church on Christmas Eve, and the one year we took the girls, Maddie had a magical look on her face that I'll never forget.
But much of the holiday season is already behind me, and it's only December 19. That's a funny feeling. We had Alter Alternative Christmas two days after Thanksgiving, because we were all together, and it was wonderful--but then it's gone before the season begins. And Sunday night I had my annual party--so that's gone too. My presents are wrapped and mostly given out--I've had a couple of really nice gift exchanges with close friends, and I have several presents to open. I told Jordan I didn't want to sit home alone and open them, so Saturday, she and Christian and Jacob are coming for a present-opening session, followed by lunch at the deli (a nice ecumenical touch--we'll have our Christmas meal at a Jewish restaurant!).
But I'm so glad I'm welcome at Jamie's, even though it's Mel's family's turn to host Christmas. Like custody arrangements in a divorce, my family alternates--one year it's an Alter Christmas and the next it's a year when everyone goes to their in-laws--this is one of those years, only Jamie's in-laws are coming to him. He really wants his girls to wake up in their own house at Christmas and I can understand that--he always did when he was a child.
Jamie said an interesting thing to me recently. He didn't like it that at Thanksgiving two of my children and their families stayed with me and the other two famlies were 20 minutes away. It wasn't, he said, like we were all together. Acknowledging that he loves his life now and wouldn't change a thing, he said he keeps reaching for the years when it was just me and the children and we were in Santa Fe and we were all so close (actually we're all still so close!). I laughed (with a tear or two) and told him I keep reaching for the years when they still believed in Santa and were awestruck. None of us would change the present, but the past calls. I guess it's important to keep it in perspective, treasure the past and enjoy the present.
I think part of the puzzle for a lot of us is that we reach for that high that we expect with the holidays--and it often doesn't measure up to what we remember, or thnk we remember, from the past. If we could spend more time thinking about the real meaning of the holiday, the gift of good news that it bring us that's beyond gifts of clothes and toys and jewelry, we'd stop worrying about whether or not we're having as much fun as we ought to. Maybe that's my tiny bit of resolve for the next week.
I'll stay in Frisco with Jamie's family maybe until Wednesday--we really haven't worked out when or how I'll get home--and then I'll hit my desk. It's nice that I have lots of work waiting for me, work that I enjoy.
Oh, and here's another thought. The day after Thanksgiving, when we all went to my brother's for a reunion with his kids and his wife's family, we took a huge family picture. I showed it to a friend who knows most of us today, and she said, "You are so blessed." And tonight I was writing an identification chart for my aunt in Canada so she'd know who was who, and I had that thought again. I am so blessed. So I guess I'll let go of the past and enjoy the present. It's a wonderful picture! 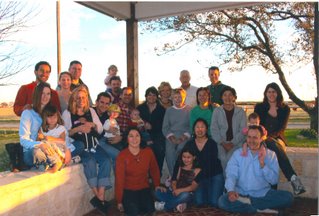 Posted by judyalter at 7:18 PM