That kind of a Sunday

Sophie’s pose illustrates perfectly how I felt about today—it was that kind of Sunday. Once again, it took me a while to get going, though I did get my hair washed so as to be ready for church. But Christian pleaded exhaustion, and I went to church on the computer. Apparently, the national habit of turning everything into a designated holiday has reached the churches. Today was Higher Education Sunday, a special day I don’t remember ever hearing of before. But the sermon hit home with me—it was about how TCU and my church, University Christian, need and support each other. The community formed by those two institutions has been the center of my adult public life, and I was glad to hear the relationship affirmed, in spite of past occasions when the two took separate paths.


I would much prefer to be physically in church, but when that isn’t possible, I am grateful for the live streaming. Today neither the audio nor the video cut out, which happens too frequently and is so frustrating. The music, of course, is not as grand and glorious, but I still get a sense of a part of the week set aside for worship and inspiration.


Once the early service was over, I alternated between baking oatmeal/raisin cookies and a chicken casserole for supper. Not sure the casserole was a hit—personally I thought it needed salt, which is easily added. But I didn’t taste the wine/herb base I used. It’s a technique I used to do all the time with leftover turkey. Somehow it wasn’t quite the same. Jordan’s blue cheese salad was good.


Finished a cozy mystery that I really enjoyed—By Book or by Crook, a Lighthouse Library Mystery—and started an Alexander McCall Smith title, The Second Worst Restaurant in France. Despite the great popularity of his #1 Ladies Detective Agency Series, I never could hook into those books and so have not been among Smith’s legion of fans, which always gives me the feeling I’m missing something. But I liked the title of this one, and novels about food always draw me in. Not far enough in yet to have an opinion. 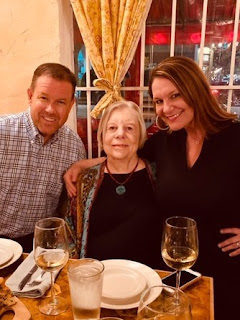 Still basking in the loveliness of last night’s birthday dinner. Sue took this picture of Jordan, Christian, and me. As usual, they photograph wonderfully—I think that was a gene I missed, but this is a better picture of me than many. My dear late friend Bobbie used to tell me she didn’t know why or what it was but I really never did look good in pictures—Megan always said, “Bobbie tells it like it is.” And my mother told me that her father once said she took such a poor picture that the only place he’d hang it was in the barn. I think Mom passed that gene on to me.


Hard freeze tonight, but who needs a greenhouse? I have a shower stall. 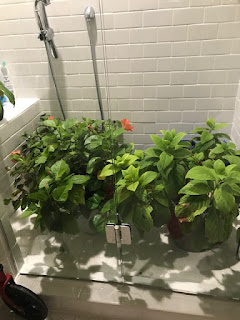 Posted by judyalter at 8:43 PM