A football kind of a day 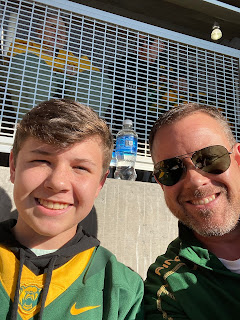 Pictured above are two happy campers who drove to Waco to watch Baylor whup UT. I’m sure they won’t lord it over the Austin branch of the family—or maybe they will. Meanwhile, back in Fort Worth, Jordan and I had a nice day together—she made tuna for lunch and helped me get myself together to go to Tomball tomorrow


But she too was watching the Baylor game—some of it in my cottage. She had me so cowed that when she went to feed the neighbor’s cat with a warning she’d be back to watch the game, I was afraid to change it to the news channel. As soon as Baylor won—well, with five second left but it was clear—she was off to friends’ house to watch the TCU game. She had urged me to go, but in all honesty I’m happier at home with a book.


Watching football never did much for me. Maybe I was off to a bad start, because I came from the University of Chicago which had abandoned the game long before I arrived on campus. In fact, the football stadium was famous for something entirely different—the development of the atomic bomb. I grew up with stories of how they almost blew us in the surrounding neighborhood to smithereens, but that’s another story.


When my ex and I arrived in Fort Worth for his surgical residency, we were often invited to TCU games by physicians. In those day—the sixties—going to a TCU game was strictly a dress-up affair. Funny to think of now. I remember one of the first games I went to. It was September, but coming from Iowa, Illinois and Missouri I associated football with cold weather and dressed appropriately, lugging a full-length coat to the game. Needless to say, I was a bit over-dressed.


Later, when I was single, Toni Newton, the wonderful woman who was assistant to Chancellor Bill Tucker, befriended me and used to invite me to the pre-game parties at her apartment, which was kind of across the road from the stadium. I went for the conviviality and for the delicious array of pot-luck snacks, and then I went to the game out of politeness. After a few of those evenings, I got so I went to the pre-game party and snuck home when others went to the game.


I have never since been to a game and only watch when I cannot escape. Tonight I was completely happy to stay home with leftover meatloaf (only medium good—freezing didn’t preserve it as well as I’d hoped) and the rest of last night’s spinach, which was delicious. And two molasses cookies—I am loving them. And, of course, the mystery I’m reading.


Sophie had a spa day today in preparation for travel—a bath, a trim, nails trimmed, a fresh scarf, the whole works. Lisa, Colin’s wife, does not like dogs on furniture and I don’t blame her. That’s certainly how I was raised. They have a big dog who wouldn’t dream of getting on the couch. Sophie on the other hand thinks beds, couches, upholstered chairs were meant for her, and try as I might I cannot dissuade her. So I thought the least I could do was have her clean. I’ll take her crate, where she happily sleeps at night. I usually displace my granddaughter whose bed is so high Soph can’t begin to think of jumping on it. Shoot—I can barely get into it. It always puts me in mind of the tale of the princess and the pea. (I guess you have to be a certain age to get that reference.)