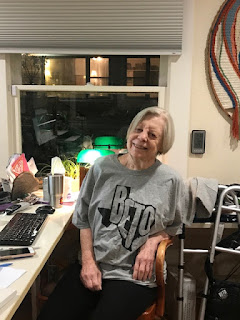 Some Facebook posts today have made me realize there really are still good people in this world—a family who took in a Central American boy for a summer and ultimately adopted him, a woman who opens her home to immigrants recently released from our detention centers—she has given food, clothing, a place to sleep, and, most of all, kindness and encouragement to over 1400 immigrants in the last eight years. And there’s a South African community that “punishes” a miscreant by putting him in the middle of a circle of his tribe who spend two days talking about the good in him. What a wonderful, positive approach. We need to spend a lot more time talking about the acts of kindness and caring in this tired old world of ours.


I can’t claim much self-pity tonight. I am well-fed. Jordan picked a recipe for our Sunday supper—chicken francese, essentially chicken in a lemony broth. But it required dipping the chicken first in flour, then in beaten egg, and doing it in batches. Definitely not a recipe for a tiny kitchen and a hot plate. I turned it over to Christian, and he did a masterful job, with some tweaks of his own. Delicious. 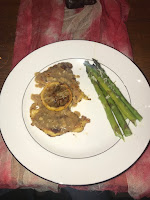 And speaking of recipes, friend Ellen Kurtzman hooked me up with a Scottish web page. I got to tell you—those folks really like fruitcake, something my family won’t touch. Years ago, when I was a doctor’s wife, we used to get fruitcake as gifts, and I had it in the freezer for months. Don’t get me wrong—I like it. But a little goes a long way. Still this web page has tone of fruitcake recipes.


The most amazing one? A three-ingredient cake—dried fruit (which my kids uniformly abhor), flour, and chocolate milk. Sounds great to me, but I don’t know what I’d do with it after I made it.


My mom used to make a yeast-rising coffee-cake with English dried fruit in it, flavored with cardamom. I love it and long for it to this day, but my kids are loudly scornful of it. Who raised those kids with such limited taste?


And clothing. At this late date, I ordered and got a Beto T-shirt to show my support for our Texas senatorial candidate. I wanted to wear it to church this morning, but common sense prevailed. Still I figure I have to wear it everywhere in the next—what?—sixteen days.


Loved the picture of Thomas Torlincasi, a local activist, at a Cruz rally. Talking to a reporter, he casually unzipped his jacket to reveal his Beto shirt. The image even made the George Stephanopoulus show this morning.


And, finally, speaking of clothes—I set the record for a fast change this morning. I wasn’t sure if Christian would make it to church or not, but just in case I washed my hair early. At 9:30 he said he probably wanted to go, but he was trying to get up and would let me know by ten. By 10:15 I decided we weren’t going. So when Jacob came out, dressed in church clothes, at 10:40, I was still in jammies, no makeup. Would you believe we left at 10:48 and made it to a pew before the processional? As always it was worth the rush, and I’m glad we went.
Posted by judyalter at 6:50 PM