With August winding down and kids now one week into school, I tend to think it’s nearly fall. Nor in Texas. As I write, in the late afternoon, my outdoor thermometer says 103 and there is not even a whisper of air stirring. Still I have the patio doors open, and it’s quite comfortable. 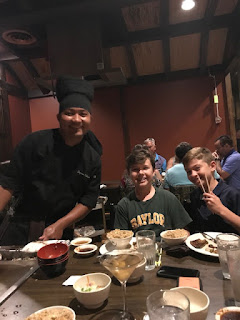 Last night a neighbor sent pictures of her son Hayes and Jacob at the Japanese Palace, always one of my favorite restaurants. The last time I took Jacob to a Japanese restaurant, he behaved badly—ordered edamame salad, which he disliked, and fussed and squirmed and ruined our meal. So I wrote Amber I hoped the boys were enjoying—the grins on their faces certainly indicated that—and behaving. She replied they were being angels (maybe she’d had a glass of wine which blurred her vision?).


Jacob spent the night with Hayes, but when he came home today he came out to visit I asked about the dinner, and he seemed most impressed that they sat at a table where you actually sit on the floor and your legs dangle in the space under the table—don’t guess I can do those anymore. He liked it that you could learn your elbows—wait for it!—on the floor. What did he order? Shrimp?  Well, no wonder he liked it.


I’m slowly proofreading my cookbook—a chapter at a time. Wow! Sure different from proofing a novel. I’m finding lots—maybe I have changed my mind about this dish or that. And in some recipes, the instructions were left out—I’ve had to go back and reconstruct. Slow, tedious work which is why I do it a section at a time.


To relieve my boredom, I’ been reading fiction-today a cozy novel about a Renaissance Faire. Well, I was reading it until I gave up—I do not need to read one more description of a deep green gown with ribbons fluttering or hear in my head one more line of Faire-speak, “Prithee, kind sir!”. Way overdone. I wanted to get on with the action. And there is some bad dialog—suspecting a woman might be abused, one character moans, “Why do I care?” and is told, “Because you’re a woman. We all care.” I’m leaving the world of Renaissance Faires (really, I’ve read some good books on that theme) for the blood-and-guts world of English horse racing in a Dick Francis I discovered I’ve not read. 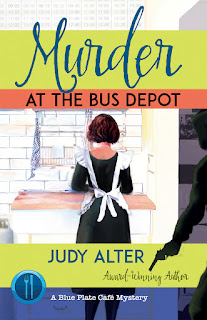 And no, I will divulge neither the title nor author of the cozy, but I will say that out of 114 reviews on Amazon, 67% are favorable. Those cozy fans are a diehard bunch, and maybe that’s why I hesitate a bit before jumping into writing another. I’m still waiting for inspiration to strike me, and perhaps it soon will.


And speaking of reviews, Murder at the Bus Depot garnered a nice one on Amazon: "Murder at the Bus Depot" is another entertaining episode in Judy Alter's Blue Plate Cafe series, and a welcome addition to the family. Alter's characters are likable and believable, and the plot twists keep you guessing. It's amazing that so much drama can go on in such a small East Texas town.”
Posted by judyalter at 3:51 PM