Haircuts, “the” wedding, and a golf tournament 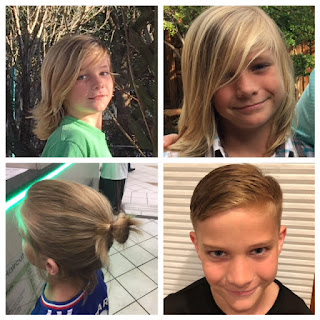 My youngest grandchild, Kegan David, got a hair cut today. Normally a boy’s haircut is a big step in his initiation from toddler to childhood, but not so with Kegan. He’s twelve, and he’s worn his hair shoulder-length for a couple of years now. When I was in the rehab facility, he came to see me, and an attendant asked if he was my granddaughter. I said no, my grandson, but his dad assured me it was okay. Kegan was used to the confusion, and it didn’t bother him.


The thing is, Kegan’s is a super soccer player. He’s small for his age, but he makes that up in determination, and he’s a tiger on the soccer field. At the age of ten, he was invited to play with a team of twelve-year-olds. His goal became getting his hair long enough to wear a man-bun, like the European soccer players, and he achieved that. But it seems the school he attends harbored some suspicions about long hair and exerted pressure to have him cut it. 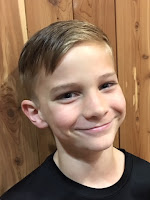 Two weeks ago or so, he cut a couple inches off, but this weekend, when he was up here visiting, he still had that shoulder length, fine, blonde hair. His dad said today, back home, Kegan announced, “It’s time.” I’m so pleased that his parents let him be the one to make that decision. His mom says he likes his new haircut and grins all the time. I’m waiting for a report when he makes his debut with his new look at school tomorrow. Mom Lisa just happens to teach at the same school he attends.


Other than that, a lazy day. I guess I’m still recovering from the heady events and lack of sleep of the first part of the weekend. If I’m that tired, just think how Harry and Meghan must feel. I’ve read more about the new Duchess of Suffolk in the last day—she is much more than an American movie star. She’s known for being an activist, particularly for feminist causes, and apparently, she and Harry may take royal public service to a whole new level. I’m cheering for them. They sure are a stylish couple, and who but a strong woman would walk down the aisle alone, trailed by those adorable bridesmaids. I’ve also read much about her mother, Doria Ragland, and come to a great admiration for that woman who sat alone in great composure during the ceremony. Surely, she passed some of her strength on to her daughter.


My take-away from the wedding, besides awe at the wonder of it: the word bespoke. I knew it before but was never sure of the meaning. Now I’ll never forget. Everything Meghan wore was bespoke—made especially for her for the occasion. I’m working on understanding the “quire” of a church. Dictionary doesn’t help much—it’s says a quire is four sheets of paper folded to form eight leaves. We used to call that f&gs back in the day in publishing—folded and gathered proofs, but not bound. Clearly not what was meant when the news reported that Prince Charles met Meghan at the quire of the chapel. 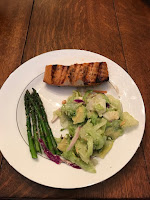 On the home front, Christian marinated and grilled salmon tonight, and we had a wonderful supper. Christian and Jordan will disappear this week, wrapped up in the events of the Fort Worth National Invitational Golf Tournament. I liked it best years ago when we could just call it “the Colonial,” but I’ve never been a fan. Who wants to walk around a hot golf course following men who are chasing a little white ball? For Jordan and Christian, it’s a big event.


Should be an interesting week. How about yours?

Posted by judyalter at 7:43 PM