Started the day by going to church. It’s been months—at least last May—but since I am feeling so well and pain-free, I was more than ready to go back. Have been getting out to eat with friends, and if I can do that, I can go to church. Today was special—a reception for Cyndy Twedell, who's been a minister at the church for 30 years. The brief ceremony was the kind that inevitably brings tears to my eyes, good tears. Cyndy epitomizes as a minister and as an individual Christian love and caring—reaching out to underserved communities, active in our shelter for the homeless, going on mission trips, leading the prayer shawl group, more than I recount but always extending God’s love to others.


During the church service, I had one of those thoughts that surprise you and then seem so obvious: I read on Facebook and elsewhere wry comments that the sitting president has indeed made America great again, he has united the country but not in the way he intended. These remarks stem from the fact that undeniably many more people are politically active and involved than usual. But it dawned on me that this presidency and this Congress have also awakened the faith of many of us. Today in church I had a strong sense of my faith, its importance in my life and its role in guiding how I treat others. My goal is compassion and love for all—all peoples and animal life as well. I am appalled by stories of immigration sweeps that arrest anyone Latino, regardless of their immigration or law-abiding status. I am horrified by stories of people trying to enter or even return to this country who are turned away. For some reason, one story sticks in my craw: legislation to rescind the ban on hunting wolf pups, shooting bears in their dens, and using steel-jawed toe clip traps on bears. The traps cause unbelievable agony, and I cannot believe humans would resort to that when there are humane ways to re-locate bears if necessary. In short, I am appalled by the governmental lack of compassion and caring, by the selfish greed of voting immunity from prosecution for themselves while prosecuting others wildly.


Change to a light note: we had high tea tonight. 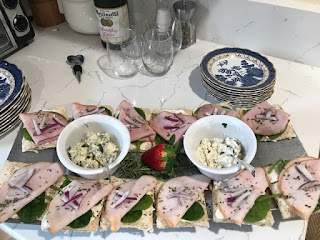 Jordan fixed it for a few friends some of whom contributed. I even made chicken salad at nine this morning, before church. She served a beautiful spread. This is my kind of food but I was afraid others would find it slim pickings for supper. I thought Christian for instance would be prowling for snacks by eight o’clock, but not so. We were all over-filled with good food. 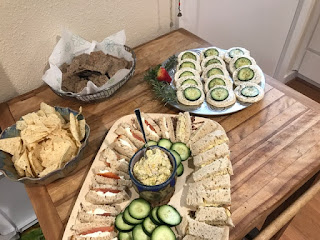 A nice surprise, political at that: my neighbor, directly behind me, is president of our neighborhood association and has just announced for the school board. Jason Brown is the kind of guy who really cares about our neighborhood, our kids and schools, and our city. Jacob played with his son until after dark, so Jason walked him around the block to home. We invited him in, asked about his campaign—his campaign consultant told him to practice his spiel on friends and neighbors, so quite quickly, at our request, he was explaining his position on several issues. Fascinating. To my relief, he said Betsy DeVos will have little effect on us at this level.


If he’s on your ballot, please vote for Jason Brown for the Fort Worth ISD School Board.

"immigration sweeps that arrest anyone Latino, regardless of their immigration or law-abiding status"

That is a blatant lie. There are not enough resources to arrest anyone who looks "latino" (BTW two of your kids "look latino", so they need me to go bail them out?). The focus is criminal aliens. ICE has stacks upon stacks of aliens that need to be removed due to SERIOUS CRIMES they have committed. Let me get this straight, you cross into the United States illegally and commit a crime(s), yet are surprise when the law comes after you?...that's rich!
If you feel so at one with these law breakers, why don't you live on the other side of seventh street? perhaps a little closer to Hemphill?

You're crossing a line I don't welcome--only one of my kids looks Hisanic, and I worry about him. I'm not sure who you are, hiding behind anonymous, but I question your right to discuss my children or where I choose to live. I am all for deporting those who have committed crimes but NOT those who have been contributing citizens and built fruitful lives. I have read news reports of ICE agents getting aover-zealous in the sweeps--besides, that's a little like shooting goldfish in a bucket.

This is the second nasty response from " Anonymous" that I have seen on your blog. Totally unwarrantable. And wrong!. Hate speech.

Anonymous is out of line and incorrect. Today's news is full of the "expanded" powers of ICE and of people who've committed misdemeanors or done nothing at all being rounded up. This new sweep is not limited to Latinos.

Judy, I love your high tea--just wish I'd been there. Makes me want to bake scones. :-)

Ellis (Google doesn't let me use my name)

Ellis, I wish you were here for high tea too, although we didn't have scones. I'm not fond of them, even though they are trendy.
The sweeps get worse daily, and I read today that the president is thinking of mobilizing 100,000 troops for that purpose. The border is already saturated with Border Patrol and ICE. What is he thinking of ? Oh, right, he's not thinking.
The effects to our economy will be devastating.