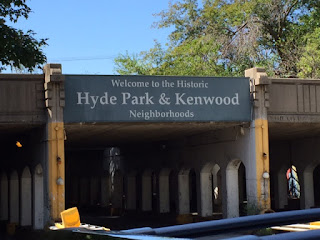 One of Life’s Magic Moments


This morning Chicago was cloudy, and Lake Michigan was perfectly still, a quilt of pale blue and gray patches reflecting the sky/ It had rained during the night, and the beach was wet and nearly deserted. I settled myself to write this blog while staring at the view. Ran out of time, saved my work, intending to finish it tonight. Now I’m safely home again in my cottage, but determined to reconstruct the blog. It dealt with our first morning in Chicago and described one of life’s rare magic moments.


We headed out to tour the neighborhood where I grew up. When we turned off the Outer Drive at 47th Street, we were greeted by a huge sign saying,, “Welcome to the Kenwood-Hyde Park Neighborhood.” Nothing would be but we take a picture.


We drove down Dorchester Avenue, past Farmer’s Field (a big open field in my day) which is now a community park. Then past St. Paul Episcopal Church were the Judy who lived next door to me met her husband and married him fifty-some years ago. And then we turned into Madison Park. 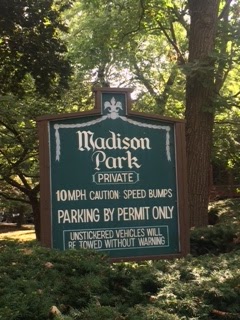 I grew up in a small, three-block long enclave between 50th and 51st street. The park is ringed by houses on the north side and apartments on the south, with a narrow one-way drive all the way around. 1340 is about a block into the park, a skinny tall red brick-and-stone structure. The kids were enchanted and got out to explore. Eventually the next-door neighbor came out to see what was going on—his house sits on my dad’s garden and was specifically designed to match 1340. He obligingly took a picture of the kids on the steps of the house, and that picture is forever emblazoned on my mind. That was the magic moments for me. 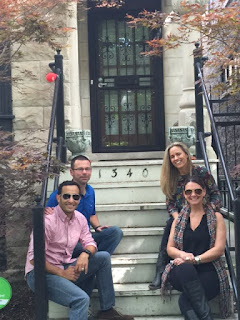 We lingered in the park, which is lush and green with well-tended grass, a profusion of trees, and bushes. As best I could I recalled who lived where. Finally we drove out the far end  and went a few blocks to see the Obama family’s home. Big disappointment. I didn’t expect to drive right by it but neither did I expect the whole block to be off-limits to foot or vehicle traffic. Trees around the house have been allowed to grow up to the point you can barely tell there’s a house there from the main street to the side.


We drove around the immediate neighborhood, dodging one-way narrow streets. Couldn’t recognize the hospital where Dad worked—it’s now condos but I couldn’t see the structure of the original building. We drove by and photographed friends’ houses, we drove down 53rd, the main drag which took us past the YMCA where I spent much of my teen years and past the church around which my social life revolved. The kids wanted to see Cunag’s, an ice cream parlor that made the best thick, old-fashioned milkshakes—alas it is gone.


Then on to the University of Chicago campus where the Gothic buildings seem to transport you back in time. 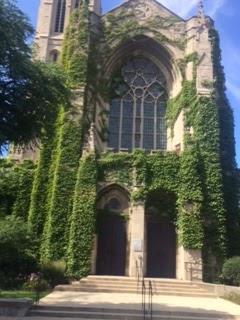 Particular favorites were the impressive Rockefeller Chapel where I graduated, Robie House, a Frank Lloyd Wright building, and the Unitarian Church where my parents married—my kids are a bunch of sentimentalists and insisted on pictures.


From the sublime to the ridiculous, they wanted a Chicago dog, and we found a hole-i-the-wall Nathan’s. Then on to lunch, but eating out in Chicago is a whole ‘nother story.


I had forgotten the beauty of Madison Park. Today those wooden front porches everyone had are gone, revealing the beauty of the original huoses, and property is landscaped in a way never dreamed of in my day. I was delighted with how beautiful everything was—the kids expected a neighborhood that had seen better days and were delightfully surprised. And the tour gave me a whole new appreciation for my parents, the atmosphere in which they raised me, and their taste in neighborhoods and houses. And a big appreciation for my children, who were so excited to see it all, so responsive. They understand what the day meant to me...and to them. 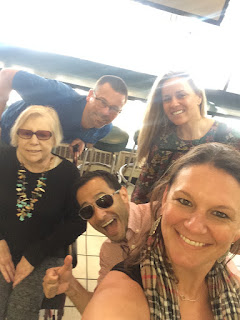 Posted by judyalter at 8:34 PM

Hemingway rings a distant bell but I couldn't say for sure nor could i point you to a residence.