Eat your way through Chicago 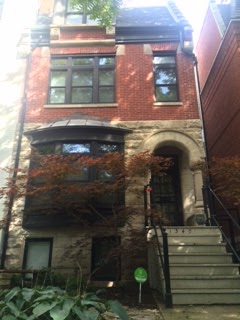 First, I somehow didn’t post a full picture of my childhood home, so I’m making amends tonight. I must have given my children an erroneous picture. They expected something run-down, perhaps even torn down. Christian thought probably a modest white clapboard house on its last legs. Instead they found what they insist on calling a Brownstone—it isn’t, because it isn’t made of the classic brownstone but it and many of the houses in Madison Park are in the style of a Brownstone. So here’s 1340 Madison Park, in all its red brick-and-stone glory. My family used such words as quaint and charming, and I think they’re right.


On to food. Chicago is a city that likes to eat and knows good food. We spent most of our time on the near North Side, which is where our hotel was and where the new and trendy restaurants are. Fortunately, the Drake Hotel has concierge service, so we ate only one huge breakfast, but oh my! Lunch and dinner made up for it. I’ve already written about our dinner at Publican on Wed. night, so let me begin with Thursday lunch.


Thursday morning was our great tour of Hyde Park, but the timing was just right—we were at Frontera Grill in time for 1:30 reservations. Frontera is Rick Bayhless’ restaurant, and an educated guess leads me to say it features food from the interior of Mexico. I am leery of spicy hot, but the waiter was most helpful, bringing me a sauce to taste. It was mild and buttery, made of summer squash blossoms. But it went on trout, which seemed too much for lunch, so I had a goat cheese tamale with fresh wild greens and a pasilla sauce, along with a Caesar salad. Others had tortilla soup, and we shared ceviche and guacamole. Wonderful menu and the food more than lived up to its promise. 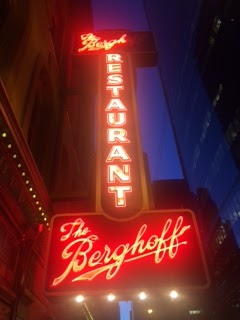 A friend generously gave us a certificate for an impressive Italian restaurant—tucked away out of the mainstream, quiet and classy. We had drinks and then went to Berghoff’s, a historic Chicago restaurant. We went at my request, but I wasn’t as hungry as I wanted to be or as blown away by the menu. I ordered German potato salad; Megan tasted it and said, “Yours is better.” The hit of this meal was the giant soft pretzel, which everyone said was one of the best they’d ever had. 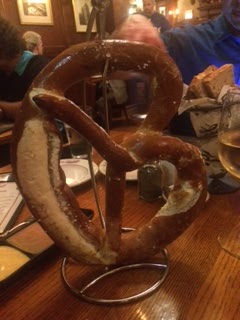 Friday lunch found us at the Palmer House—my choice was butternut squash soup and a pasta with mushrooms. Delicious. Several of the kids had salmon, and then we were off to the lecture and tour about the Palmer House.


Friday night was perhaps the best meal at RPM, an upscale Italian place. My kids seem to want to try everything, so we had five kinds of pasta, with each of us tasting just a bit. My favorite was the classic done with butter, salt and pepper. Before that we had carpaccio, fried artichokes with lemon aioli sauce, and prosciutto-wrapped dates. We should have walked to the hotel, but we didn’t. 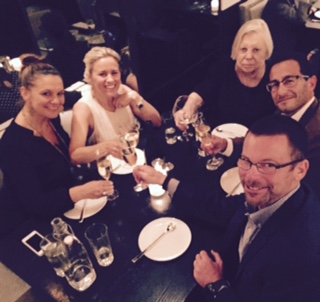 The waiter at RPM recommended Orange, in Lincoln Park, for our Saturday brunch on the way to the airport. Their feature is Frushi—a combination of fruit and sushi-style rice. We tried it of course, but when the waitress asked if we didn’t like it—there was a lot on the platter—Megan said tactfully that it was interesting but not quite what we were looking for. The others ended up with lunch—hamburger, fancy grilled cheese, chicken nuggets but I had Popeye’s Scramble—with spinach, tomatoes and cheese. House potatoes turned out to be a cone of mostly mashed potatoes. Good, but the place was a casual diner, and neither the food nor the atmosphere lived up to the extravagance I’d come to expect.


Several things I noticed about Chicago food: most restaurants tout locally grown food, and the menu will tell you where each item came from. They are big on squash-like flavors—I had buttered corn, squash salsa, butternut soup—all with that wonderful, buttery taste.


A note on getting around Chicago: I am still in a wheelchair, and I have never in my life gotten in and out of so many Suburban vehicles. Getting out is no problem, but getting in required gritting of the teeth. Colin developed a method which essentially had me end up sitting on his lap, and from there he boosted me into the seat while I grabbed the handhold. I’m sure both of us developed more muscle.


We left Chicago vowing never to eat again, or at least to tone it down. I didn’t actually feel I overate but I loved every bite and taste.

Posted by judyalter at 7:11 PM