Dogs on my mind 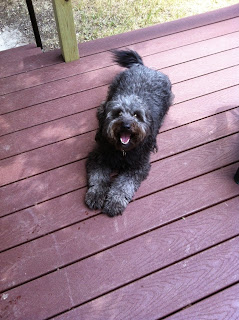 Today was Sophie's birthday, which I totally forgot about until I woke up this morning (that's okay, I also totally forgot that if I'd stayed married, Saturday would have marked 51 years--oh good gracious!). By coincidence, I made an appointment for Sophie's annual checkup today, and I'm pleased to report that she's in excellent health--a little dry skin and a little tartar on her teeth, nothing to worry about--I should have such minor problems.
But somehow tonight I got to thinking about the dogs I've owned and loved over the years. There have been a lot of them, and I loved them all but a few stand out. When I was quite young and terrified of dogs, my parents bought my brother a collie mix named Timmy--a female, no doubt a rescue dog. Someplace I have a wonderful picture of Timmy and me, sitting on a dune in the Indiana Dunes State Park, looking out over Lake Michigan. That particular spot is where I often go in my mind when I want to go to a place of calm and peace--and I take Timmy with me.
And then there was Shea, a beautiful mahogany tri-color male collie. When we were in Kirksville, Missouri, friends were going abroad for a year and asked us to keep him. Ever after when they came back, Shea would run away to our house. When we were moving to Texas, we gathered our nerves and asked if we could take him. The owner said, "Thank God. I thought you'd never ask." Shea was a magnificent, dignified gentleman.
At the same time my brother had a German Shepherd who would follow him to class. The professor would order him to take the dog outside; the next time someone opened the door, King was back upstairs at John's feet. Finally after this went on for a while, John said, "Sir, if you'll let him stay, he'll sit quietly at my feet." And he did.
We had all kinds of dogs when the children were little, but I think they most remember Claudine, the Irish Wolfhound and the most gentle giant I ever knew. A true sweetheart who had a litter while she was with us and had one limp puppy--she knew better than me and kept trying to bury it in sofa cushions or something because she knew it would die. I wore it on my chest so the motion and heat would revive it. It didn't work. The bigger the dog, the shorter the life--we lost Claudine at nine to cancer.
Along the way there were Cairns (the only other small dogs I ever owned) and Bearded Collies but the other dog who holds a special place in my heart is Scooby, my rescue Aussie. So gentle, so grateful for love. He'd been a junkyard dog and abused, and he had a lot of baggage, but he was a love.
I've always had big dogs, so Sophie is a bit of shock to me--she's medium, weighs 32 lbs. as of today--but in some ways she has a small dog temperament. Excitability, high-pitched barking when she feels it's called for. But I adore her and I think it's mutual (she's asleep at my feet right now) and I wouldn't trade for her. She has a long line of beloved dogs behind her.
Posted by judyalter at 8:03 PM