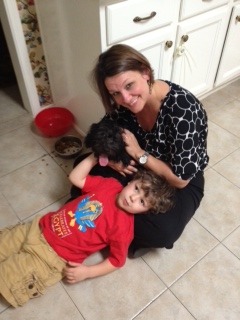 Jacob, his mom, and Sophie
I'm still thinking about my neighborhood. Late this afternoon Jacob went to the neighbors behind me to play. When I went to pick him up and get him ready for his baseball game, they were all down the block, looking across the street. A blue heron was perched in another neighbors' shrub, standing tall and erect, almost like one of the statues they have on their porch railing. I drove in that driveway (on a separate errand) but the bird never moved, never flinched. Jacob thought it was cool. It's not everywhere that people, and children, get so excited about a rare bird.
Tonight, while he was at his game, I saw on the porch and read--so peaceful and quiet, except for lots of birdsong. Wish I was better about identifying various birds and their songs. Lots of walkers, many with dogs, went by, along with bikers. Lately I've noticed an unusual number of men riding bikes with baby carriages--those little cocoon-like things--attached to the back. Today I saw one brave soul with one of those plus a toddler strapped to a child's seat directly behind him. Brave soul! I said as much aloud, and Jacob asked, "Why is he brave?"
Jacob is still at his Little League game, something I have mixed feelings about. Last night, his dad had to interrupt his planned evening to take him to a game; tonight another boy's grandmother picked him up, because his parents are both busy and my knee is not up to tramping around a baseball field--I'm not sure my psyche is either; tomorrow his parents will take him to an evening game. Three games in three nights? There goes the weekend. And tonight he'll be sweaty and dirty; if he's going to church with me, he needs a shower. He's used to baths--at home--so this will be an adventure.
I don't think Jacob knows his neighbors at home or has playmates on the street, so that's another plus about the neighborhood. He's getting a sense of neighborhood and friends. Jay and Susan next door pay a lot of attention to him, and he has Sam and his little brother behind us for playmates (I swear I want a gate between the yards). But it's one of the things I'm glad I can offer him.
And the other, a big one, is that I've taught him to love dogs. When Sophie was tiny, she bit and jumped so much, as puppies do, that he didn't like her, so he turned to my Aussie, Scooby. We lost Scooby last summer, and Jacob and Sophie are not almost inseparable. They spend hours outside, running, wrestling, playing fetch. From being afraid of dogs, he's gone to being a dog lover.
Life is good. Sorry I've rambled but that's the way my mind is working tonight.
Posted by judyalter at 6:25 PM