What ever happened to arithmetic? 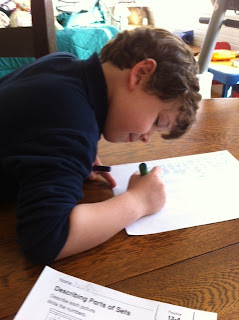 You hear grandparents complain, "I don't know why they can't do things the way we did in the old days!" I used to shrug such comments off, but now I'm tempted to join the chorus. Every day I help six-year-old Jacob with his first-grade homework. He has a spelling list, to prepare for the weekly test on Friday, a math or logic exercise, and a short book to read and write four sentences about.
He's a medium reader. Sometimes he whizzes through a book with few stumbles; other times he looks at me and says "I've never seen that word before." Then we sound it out, letter by painful letter, so that he's capable of saying a word in odd sounds but not putting it together into a word.  Trying saying, "A-rrr-ou--nn--dd"--it doesn't sound at all like the word. The other day he collapsed in giggles at his own cleverness when, trying to figure out "after" he looked at me and said "Rain forest!" Made me giggle too but didn't help with the job.
Then the essay--oh, my! He can write it, with help spelling the words he doesn't know, but it's hard to make him decide what he's going to write about (there is a list of possibilities). Sometimes I want to scream and say, "Just write it! Write anything!"
In math, he can do spatial relationship problems just fine, but sometimes the questions are so ambiguous that I'm as befuddled as he is. His father looks it all over at night, and one night he called to complain, "When are they ever going to teach him plain arithmatic?" We had exercises with coins (which cost me practically my whole change purse in object lessons!) and he knew a quarter was twenty-five cents but when I asked what two quarters made, he guessed thirty cents. No one had taught him to put 25 over 25, add 5 and 5, carry the one, and come out with 50. He counts by fives, which is how we got there, but it's hard when you throw pennies into the mix.
As for the spelling list, he does well, usually gets a perfect score (104 with ten words and two bonus words) but that's after lots of practice all week. I have to remind him to put vowels in between most consonants. English is a difficult language to say the least. How does he learn that "oo" has one sound in "soon" and a totally different one in "door"? He likes to play Hangman, so that's one of the exercises we do; at home last night he copied each word three times (he doesn't like that) and took a pre-test. Today we'll do a pre-test again. The list this week is, to me, easy because he consists of a word and then the form with "ed" added: ask, asked, plan, planned (got to get that double "nn"--he doesn't yet have a good enough ear for the languate to recognize that "planed" and "planned" are different).
By the time we get to fifth grade, I'll be over my head. I don't remember my children having homework in the first grade, let alone this much, and I am pretty sure I didn't have it. The world is changing too fast for me sometimes.
Posted by judyalter at 2:10 PM