Dogs are so funny! 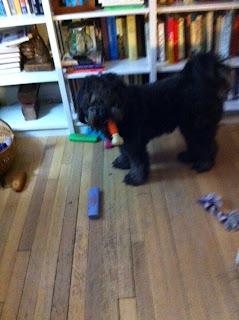 Sophie with a favorite bone
Sometimes Sophie seems to know exactly what's going on and what we're saying to her. Other times she's clueless--or ignores us. This morning Jordan came in after taking Jacob to school, and Sophie, rope toy in her mouth, attacked, all but demanding, "Play with me, play with me!" Jordan declined because she didn't want to be jumped on in good work clothes. When she left, Sophie was the picture of dejection, rope toy still in her mouth. She stood looking out the window toward Jordan's car as if saying, "I can't believe she left me." When she heard the motor start, she dropped the toy. I'm sure she was saying to herself, "Well, there goes that."
A bit later, when I went to change so I could run some errands, she watched me anxiously. She knows what it means when I make the bed, take off pjs and put on jeans and a shirt. She slunk into her crate. I thought it was nice enough for her to be out since it was to be cold later but she clearly objected, so she stayed in her crate while I was gone.
Last night, she caused me some embarrassment. She's not a bad barker and certainly not one of those who barks to hear herself, but when she's in a frenzy over some critter, she has a high, shrill bark. I went to bring her in, but she was jumping at the back fence; obviously there was something up there. I don't remember hearing her bark, but I do know she ignored me when I called her. Then the neighbor behind us called and mentioned gently that they were trying to go to sleep early and Sophie was disturbing them. I went out, used my sternest voice and a chew stick as temptation, and got her in. This morning I sent off an apologetic email and got a pleasant reply, saying Sophie doesn't usually bother them.
Right now, Sophie is curled up at my feet, under my desk, good as gold, and we're both happy campers. She reminds me of the little girl with the curl: "And when she was good, she was very good/And when she was bad, she was horrid." I cannot imagine life without a dog--especially without Sophie who long ago worked her way into my heart..
Posted by judyalter at 6:09 PM

Was thinking the same thing about not having the life of a dog in my house this weekend when I had no Internet, thus no computer or TV. My dog Wookie is a constant companion who is always in a good mood and ready to play.

My Sophie rarely barks but, sadly, she has no idea how to play. I've tried every game I can thing of but she just looks confused and goes to her bed. I guess her former life didn't include play.

Funny how many of us name our dogs Sophie. Someone told me the name you give our dog determines his or her behavior, and I decided Sophie got her mischievousness from her name. But you disprove that, L.D.