A visit with family

I never blog beforehand when I'm going away. It strikes me as waving a banner that says, "Hey, my house is empty. Come on by," even though my house isn't totally empty. There are two dogs and the pet sitter is in and out. But in the last few days a few may have caught hints that I wasn't in my usual place.
I was in Houston with my oldest son, Colin, his wife, Lisa, and their two children--seven-year-old Morgan and four-and-a-half -year-old Kegan. I did all those grandmotherly things that I probably don't do enough with Jacob--I see him almost every day, and I rarely see these children. I think that made me more conscious of being an attentive grandparent. I went to gymnastics and a soccer game, and I listened to Morgan read her two short books every night. In truth I was impressed with her reading, though she has to work a bit on intonaton and expression:-) While they were at school and at work, I did a lot on my chili book, did my yoga each day, and was quite domestic--emptying and re-loading the dishwasher (the first time I emptied it and shelved unwashed dishes, so after that we had to clarify), made a pot of chili one night, two batches of brownies another day, not sure what all but one day it was noon before I got to my own work. Colin came home and asked, "You weren't bored?" and I assured him not. Colin is a controller for five golf courses and Lisa teaches 7th grade math, the children are in day care, and everyone is gone until 6:30 at night. And they're all in bed by 8:30--I had a two-hour visiting window.
These are children I don't see as much of and the little one has been really shy about hugging me--or allowing me to hug him. We broke that barrier this time, to my great joy, and both children clamored for my attention, hugged me goodnight, told me about their day. It was a delight. Lisa said tonight she thinks it's better when it's just me rather than all the family, and she's probably right. That doesn't happen often, but now I will have to make it happen more often with those children and with daughter Megan's Austin sons. 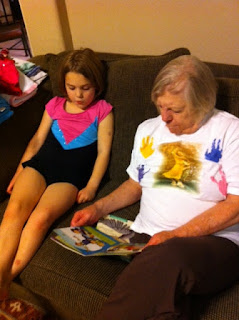 Colin took me from Kingwood--north of Houston where they live--one day to the Omni Galleria for a lunch with my former colleagues from A&M and associated presses. It was a real treat for me to see everyone and to show off my handsome son, though he expected a "luncheon" and got a box lunch. Good thing I convinced him he didn't have to wear a suit. Today, he hauled me and my baggage back down to the Omni. The baggage was much condensed because I didn't want to go into the hotel looking like the Joads had arrived. Still he took it up to the second floor, then down to the parking garage to stash in Melinda's car, and then came up to return her key and ask, "Are you okay now?" I rely on Colin, his steadfastness and his strength, a whole lot, poor boy. But I love him dearly.
Another delight of being out of my routine and element: for the first time in several weeks, I was able to pick up a book and lose myself in it. I'd saved Deborah Crombie's No Mark Upon Her for this trip, and I got a good start on it. Now, of course I don't want to do anything but read--and a few other things do call. But she is quite simply an exceptional writer. A Texan, she has the British lingo down pat, from car park for parking lot to the expletive "Sod him!" In this book, she ventures into the world of competitive rowing, with its own peculiar language and customs and does a triumphant job. I'm a great fan and love reading the book.
Now I'm back home, with dogs to feed and love, groceries to buy, errands to run, meals to cook--the whole nine yards. But I'll find time to keep reading.
And Morgan delighted me as I left today by asking, "Can we face time with you?" Of course she can, sweet thing. I'm feeling like a happy grandmother tonight.
Posted by judyalter at 7:30 PM

Labels: chilchildren and grandchildren, Deborah Crombie, grandmother, Houston, No Mark Upon Her, Sam Houston Is My Hero

I think I've encounter this particular topic before yet now after reading your article , I feel I'm experiencing terrific reassurance.
My webpage :: hull dog boarding