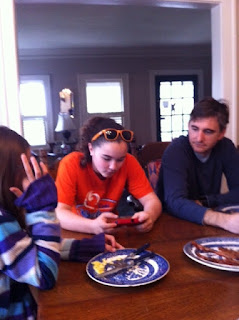 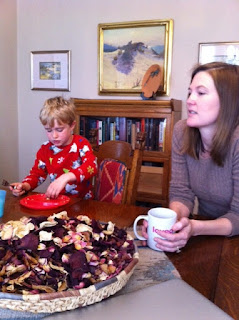 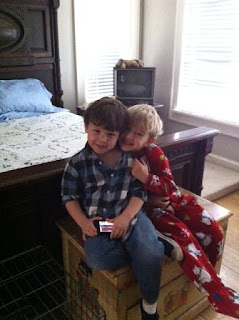 That's the kind of day it was--leftover from rodeo, stock show, Joe T.'s, leftovers for supper, leftover work--plenty of the latter.
Nobody got moving quickly at this house. It was 9:30 before the gang from the apartment came in; meantime Sawyer and Ford asked every ten minutes when Jacob would come inside. I explained he sleeps later than they do--they're really early birds. I puttered and was ready for the day when everybody came in and Christian joined us. Big, lazy, late breakfast of eggs and bacon and, for some kids, chocolate chip waffles. By noon, they were all gone, kitchen was cleaned, house was picked up and I was at my desk.
Had lunch (?) about three--cottage cheese--a nap about four but couldn't sleep, so got up and took a much-needed shower and fed the dogs. Dinner was leftovers--two dabs of potato salad, one dab of egg salad, baked beans (cold), and, for some reason, hummus--an odd combination but good. For any out there who may be expecting Potluck with Judy on Sunday nights, I have decided that trying to post that every Wednesday and Sunday is too rigid. I don't always have a good food topic to write about, and sometimes there are other things to blog. I will post it sporadically, although I just now thought of a topic. I will always welcome contributions, so email me at j.alter@tcu.edu.
I have not heard much from my children in California except a bit second-hand from Brandon, Mel, and Christian when they talked to their spouses. The weekend went well and my kids had a good time, partied hard which they father would have applauded, had fun with their Califiornia sister. Today they spread their father's ashes on his land, as he requested, and Megan sent a picture of herself flinging some in the air. I know that was a significant occasion for them. Anxious to get fuller reports.
And a word about my "other adopted children," Lisa (who couldn't join us but wanted to), Brandon, Melanie, and Christian. I know they came for the stock show, but I feel incredibly blessed that with their spouses (my kids) out of town, they want to spend the weekend with me. It'a a  real tribute to the kind of people they are. And yes, as I lost my stamina (and therefore my balance) at the stock show, they took incredibly good care of me. I am blessed. 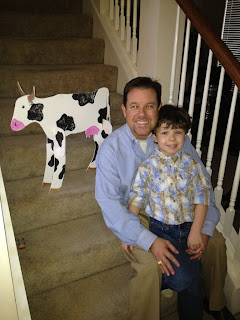 As a farewell to the annual stock show, here's Jacob with his dad and the cow he, his dad, and his mom created for his school project. I thought it was pretty cool. You can't tell from the picture, but it's three-dimensional. Kindergarten gets so complicated these days! Jacob is wearing the cowboy shirt that my good friend, his Aunt Betty, gave him. Christian has convinced me he wouldn't wear a cowboy hat if we got it.
Posted by judyalter at 6:14 PM