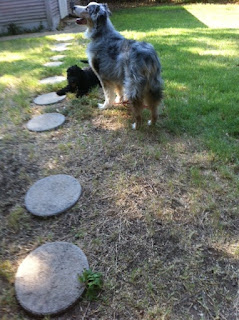 My dogs are friends at last, which really means that Scooby, the Aussie above, has decided to accept Sophie. He's twelve years old and has regarded her puppy enthusiasm--and yes, intrusion into his well ordered life--as an annoyance at the least. He'll now play and romp with her for about ten minutes before he gets fed up and goes inside. I leave the door open for his escape. She runs at him, jumps and attacks from all sides. He'll start to chase her, and she's off like the wind. Of course, he can't catch her--neither can I, which is why I leave a leash on her all the time. She gets so excited she tears from one end of the yard to the other and back, running in great wide, sweeping circles, while Scooby barks at her. I don't leave them alone yet--in fact, I don't leave her outside alone. Just not quite ready for that, and I'm afraid Scooby might lose patience. I do sometimes admonish him to be gentle.
Sophie has grown long and leggy, like a teenager, and I've decided that may be where she is in her development. She's rebellious, and one form its taking is to regress in her housebreaking. The vet says not to make a big deal of it, but I'm a little worried about when if ever she'll be trained. Apparrently regression is not unsual. But having had one accident free day, I'm dismayed by four accidents today.  Sometimes I think she's got some stubborn terrier in her, though I don't know much about the poodle half of her. Are poodles stubborn? All I know is they're smart, and she surely is that. One thing she is very good about is crate training--she resists going into the crate but goes when I force the issue gently, and she never utters a sound once she's in there. Tonight she spent the evening in her crate because my class met here.
The class remains a delight. They can tell the most amazing stories--some of which make me feel naive or sheltered or at the least not adventuresome. One woman who says she can't come back in the next session hinted at some things she'd seen and done when young, and we all clamored for her to come back. We want to hear those stories!
I've gotten back to my work-in-progress and it feels good. In fact, I'm a bit resentful of the time other things take. Maybe this weekend I can spend more time at it and really make some progress. No title but I do have a general idea of where the story is going. Fred, my mentor, read the first chapter and said, as he always does, "Slow down!"
The print copy of Skeleton in a Dead Space is still not up on Amazon but should be in a day or two. The publisher has gotten copies and has sent my comp copies to me. Can't wait.
I'm feeling like an author today, a feeling I don't always enjoy.
Posted by judyalter at 7:43 PM