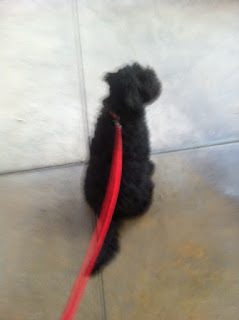 A fuzzy picture of Sophie patiently waiting for her morning hug from Jacob as he goes to school. She devils me to take her outside when she realizes it's about time. When Jacob hugs her, he gets the most blissful look on his face. Tonight he and I had a theological discussion. I told him Wywy had died and he asked if she (he, it) was in heaven. I said, "Well, cat heaven." He launched into an explanation of how God is invisible to us but in heaven you can see him so Wywy can see him and then he decided that she's up there playing with Pecos, the dog my neighbors Jay and Susan lost a few months ago. The simple faith of a child is a most comforting thing.
Today I got the tentative (I guess it's tentative--it's a bit scary) publication schedule for my next novels. Skeleton in a Dead Space is the first Kelly O'Connell mystery; the second, No Neighborhood for Old Women, is written, under contract, and as of tonight, in the hands of the editor. It will be released in April. The third novel, however, is untitled and essentially unwritten--I have about 5,000 words which only leaves me at least 65,000 to go. It's scheduled for release in August, which means I have to put my shoulder to the wheel, nose to the grindstone, and all those other cliches. Life keeps getting in the way but I really have to buckle down now, and I couldn't be happier about it. I went back to the third novel this morning and did get caught up in it. I'm working on carving myself big blocks of time to work. All of this is pretty exciting for me, and I feel fortunate.
Megan read Skeleton and I asked if she recognized her nieces. She said, "Oh, I recognized a whole lot of stuff." When my mentor Fred first read it, I said something about it being in some ways autobiographical, and he said he would never have asked but he wondered. So there, dear reader, it's for you to figure out what came from my life and what didn't. By the second novel, Kelly has definitely established her own life and there's no autobiography--except my two darling granddaughters.
Feels good to have goals and deadlines and be working.
Posted by judyalter at 7:55 PM