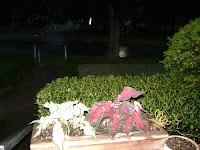 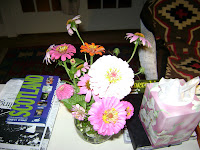 Today I replaced the cyclamen in my planter boxes. Cyclamen does beautifully through the winter, with bright blooms, but it doesn't like Texas summers. I bought caladium, though to me they are sort of ho-hum ordinary. I couldn't come up with anything more creative that would grow in my shade-only boxes, and really the caladium look pretty. Don't you think? I also bought more basil for a pot in which basil flourished two years ago and died last summer, And tonight Jean brought me cut flowers from their garden, so I'm surrounded by lovely things. Here are Jean's flowers and one of my planter boxes.

It was a dark and stormy night . . . not a great way to begin a novel, but it sure describes what's happening here tonight. Our hundred degree temperature plunged to 71 when the wind came up about 6:30. My dinner guests and I had abandoned the porch as too hot, and I kind of wished we'd go out there to dine, but then it was too windy. Then just about eight, they all left hurriedly fearing the coming storm. I brought in the dog--a big fraidy-cat--and then walked out on the porch to enjoy the storm winds. I love a good storm. Charles rushed home because his daughter, only a few years younger than me, is visiting, and he wanted to be there when she came home from dinner--she's frightened by storms. I would have sent him anyway because he doesn't need to be driving on a dark, stormy night.

All this talk on the Sisters in Crime listserv about post-menopausal women and life after 50 keeps reverberating in my head. One woman, now 71, wrote that in the last twenty years everything about her life has been better than ever. And I wrote to agree with her. I think I'm happier and more content than I ever was but I also have more confidence that I can do what I want to accomplish (write and publish that mystery!) and that most of the time my instincts are dead on (I recognize that's a dangerous presumption). I like my life--my family, my own work, my job work, my house, everything.

Which reminds me that I recently saw a query about "Has your life turned out like you thought?" Not at all. A child of the fifties, I expected to get married and some man would take care of me. That obviously did not work out well at all. I had as my model Browning's wonderful line from Rabbi Ben Ezra: "Grow old along with me/The best of life is yet to be/The last for which the first was made." Do I regret being single at 70? Minimally. Sometimes I'd like someone to go to dinner, exhibits, things that I mostly skip now because I don't like going alone. And yeah, sometimes I'd like that comforting hug that only comes from a long-term partner. But being alone has its compensations, and I've made the most of them without much regret. Children? I never really thought about them, but they've been so central to my life. They are the core of everything I am. Grandchildren are icing on that cake. Career? Although I read The Feminine Mystique cover to cover, I didn't think about a career. And in this enlightened age, I'm ashamed to say I didn't think about it until I was divorced. But I've had a wonderful dual career as a publisher and an author--and its far from over just because I'm turning 70. No, my life didn't turn out like I thought it would--just much better!

Since I'm being so profound, I have another thought--people often aren't what you imagine them to be before you meet them. An author came to town last week--we'd e-mailed and talked on the phone but never met. She was so incredibly businesslike and efficient that I expected someone sleek and intimidating--and here came this motherly, warm woman with a twinkling sense of humor in her eyes and a great willingness to be friends. We met with the provost and the director of TCU's Energy Institue, and I loved it that she kept calling them "Guys." After the meeting we went to lunch and found ourselves sharing stories of our past marriages and lives. What a neat experience.

The rain has come, but it's not a storm. Thunder is rumbling in the distance, but the rain is a nice soaking one. Hope it lasts all night. We should be so lucky! Texas is once again worrying through a dry season.

Posted by judyalter at 6:14 PM