My brother complained last night that I don't post as often as I used to, and I replied that if I did it would have "and then I did this . . . and then I did that" quality, which is a red flag to me in a manuscrpt. I've been busy but some days it beats me if I know doing what.
Sunday was a hectic day with two signings for the brand new book, Grace & Gumption: Stories of Fort Worth Women, but they were the kind of signings a publisher dreams of. I took 24 copies to a Sunday school group at Trinity Episcopalian Church, where Katie, the editor, was speaking. Sold 23 (one was damaged) and could have sold four or five more. Then in the afternoon all the contributors were at a funky small gallery on the East Side. They requested 30 books, sold the 35 I brought in the first half hour, and took orders for another 25. 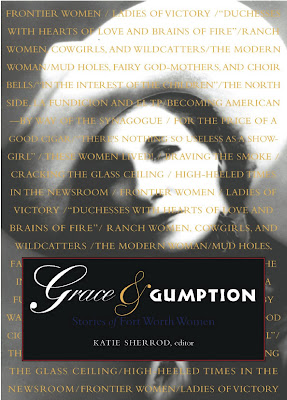 I came home and put the finishing touches on supper for Linda and Rodger from Granbury. We sat on the porch, drinking wine, eating salsa and chips, and laughing a lot. The pinto bean soup for dinner was delicious--I doctored the recipe by browning the chopped onion and garlic before adding it and adding four boullion cubes to the cooking liquid. But Linda was in severe pain from a bad knee, and it got worse when she tried to stand up at the dinner table. Seems she's facing double knee replacement but the surgery can't be scheduled until late January.
The Scottish mystery wasn't quite as exhilarating as I expected. It's set in Glasgow, not the most picturesque place in Scotland, and the people are dysfunctional (they call it mental of knackers). There's a slight bit of drug dealing--the protagonist's brother--and lots of use of the F-word, along with dialect that I sometimes have to guess at. but I'm hooked enough that I'll finish it. Maybe today, since I'm stuck at home waiting for the DISH man to hook up my office TV and upgrade my service, so Edie and I can watch the food channel. I do however have work to do--am ready to draft a piece on Merrill and Paul Bonarrigo, owners of the Messina Hof Vineyard and Restaurant.
This weekend Megan and family are coming, and, I hope, Jamie and his family. I've bought a huge chuck roast to make barbecue, and if there are only three adults, I'll have a lot left over! I haven't seen Megan's boys, Sawyer and Ford, since August, so I'm anxious to see them.
A note about how lucky I am to have good friends: tomorrow morning at 8:30 I have to have a routine echocardiogram, but it always makes me nervous. When Jordan has to have hers, Christian goes with her. So Betty is going with me, and I'm most grateful. Besides, I don't like self-service elevators alone, and by the time I climb to the fourth floor, I'm out of breath and my blood pressure is high, not auspicious in a cardiologist's office!
I just got the signing check for leasing the gas rights to my property. It's worth about two-and-a-half children's books, which strikes me as funny. I work so hard on those books and this money I got for just signing my name. Off to the bank tomorrow morning!
Posted by judyalter at 10:24 AM