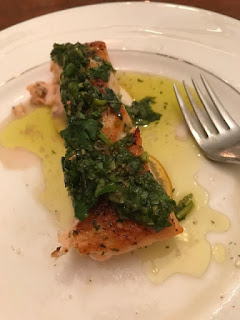 I didn’t cook as much as usual this weekend, because Jordan, Christian, and I all had Saturday night dinner with our delightful new neighbors, Victor and Prudence Zavala. We went to Tokyo Café, and the talk and laughter flowed—everything from food (she’s an astounding cook) to raising children. Christian had the sake and beef bowl he loves, Pru and I each had the lobster roll—to me, that’s elegant dining—and Jordan stuck with the California roll. Victor had some kind of tuna roll—not your regular sushi, but one large item. It looked delicious, but he warned me his dish was spicy. I love the food at Tokyo Café, but I have to watch the spicy dishes—the beef and rice bowl, for instance, looks so good but the one time I ordered it, it was way too spicy. I’m now told I can request it be less spicy.


Victor and Pru came into the cottage when they brought me home, and we still had so much to talk about, I’m embarrassed I didn’t urge them to sit and have a glass of wine. But they have young children and needed to get home. Next morning, Pru delivered a large mum she got at Costco. I protested that I should be sending her flowers in gratitude, but she responded with a directive: she will buy me flowers when she wants, and I will enjoy them. Yes, ma’am! They do brighten a winter morning in the cottage.


Friday night I wimped out on going to pick up my groceries at Central Market, which means I didn’t have the ingredients for the Eggs Benedict I planned for my supper—I meant to put the eggs over smoked salmon and use some of the dinner rolls, split and toasted, still in the freezer from Christmas. By serendipity, I had asked Jordan to pick up a few things at Albertson’s, so with the ingredients she brought, I made tuna pasties. A bit labor intensive, but so good. You use refrigerated biscuits for the dough but have to roll them out thin. The filling is simply good albacore tuna, flaked, sour cream, grated cheese, and some celery. Mine were definitely not the prettiest or most elegant pasties I’ve ever seen, with carefully crimped edges, but they were tasty, and I snacked on them all weekend. 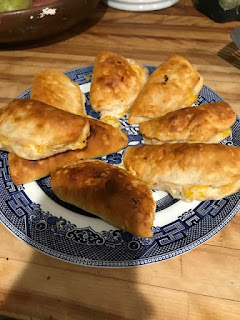 For Sunday night supper, Christian grilled some salmon—well, he tried to grill it, but the grill wouldn’t ever get hot enough, so he ended baking it, which meant we didn’t eat until 8:30 by the time he figured out the grill was just not going to do it. I made an herb sauce for it—oil and vinegar and micro-planed garlic with lots of “fragrant herbs”—cilantro, parsley, basil, and watercress. Mincing all those herbs was tedious and messy, and I vowed not to do it again until I have better tools. I’ve ordered herb scissors, so we’ll see. The sauce, however, was delicious—and pretty on the salmon.


So it’s Monday morning, and I’m just now blogging because I was too sleepy after that late dinner. But I’m resolved this will be a nose-to-the-grindstone work week for me. I have lots of reading to do. Hope you look forward to a happy and productive week. Sigh, as I write that I realize it’s a giveaway to my personality—why do I think at my age I have to be productive all the time?

Posted by judyalter at 9:05 AM