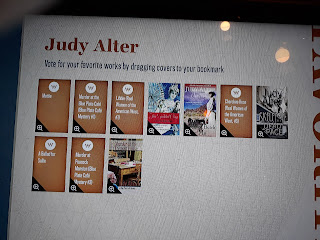 Any honest writer will tell you that feedback matters. We crave praise for our work, kind words from readers. We want to know not only that you’ve heard of our books but that you’ve read and enjoyed them. I consider myself a slightly shy and retiring person, but I freely admit to that ego Getting feedback often requires that we put shyness aside and boldly ask readers to write a review on Amazon or Goodreads, and I do that, along with other things to stroke my ego

Some of the best compliments I’ve gotten about my mysteries include the reader who swore she saw Kelly O’Connell, the star of her own mystery series, going into a very real restaurant that figures in the Kelly O’Connell books—my fictional character had become that real to her. Or there was the reader who praised my characters as being just like people you’d meet in the grocery store. Both those remarks made me glow for days.

But it’s the unexpected bit of recognition that truly brings delight. Recently I heard from an old friend, someone I worked with at TCU years ago (no, for both our sakes, I won’t say how many years). She and her daughter, on a daytrip to Chicago, visited the American Writers’ Museum on Michigan Avenue in downtown Chicago. It’s a place I wanted to visit on my last trip to Chicago, but then, in 2016, it had not yet formally opened. The museum idea was first considered in 2009, and years of planning, developing support, and fund-raising preceded its 2017 formal opening, as did some trial online exhibits.

Carla Good and her daughter tried an interactive display—the museum required social distancing and masks and gave gloves and a stylus for the interactive displays. The one they tried encouraged visitors to search for their favorite authors and then create a bookmark. It should be noted that Carla is an avid reader and her daughter, Colleen, is reference librarian in a small Indiana town. Carla searched for several authors with no result—until she keyed in Judy Alter. She sent photos, which I’m attaching, along with a note saying she just wanted me to know that I’m remembered in my hometown. 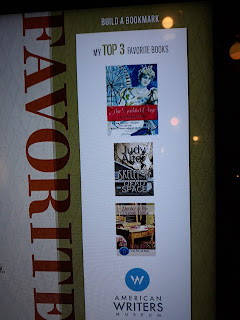 To me, the recognition is more than that. The museum does not celebrate primarily Chicago authors. It celebrates all American authors, presumably living or dead. I have no idea of the number of authors this country has produced, but I bet it’s astounding. To think that I am included in that number and others are not gives me pause—and a needed bit of humility. So I’m grateful to the American Writers Museum for including me and to Carla Good for telling me about. The museum is a definite stop on my next trip to Chicago. Since I seem to be writing fiction set there, a trip is not out of the question.

But for the sake of my ego, should I write and offer them cover art for those they apparently don't have? Surely they too can snatch pictures from Amazon, but who knows. Maybe I'll bring that up on my visit there.

An anecdotal comment on the Alter theme: when my ex and I lived in rural Missouri, he labeled our mailbox with “Alter’s Ego.” One of his professors from medical school, supposedly an educated man, said, “I get the Alter part, but what is the e-g-o?” Today, I use Alter’s Ego as the name of my imprint for my independently published books. So here’s a nod of thanks to that man I married all those years ago.

And here’s another stroke for my ego: I will be on a panel Friday for Bouchercon, the annual and large international mystery con which is going virtual for the first time, due to the pandemic. One of the other panelists sent a graphic about it, and I’m pleased to share it here. (Okay, I admit it's an older picture and belies my age!) 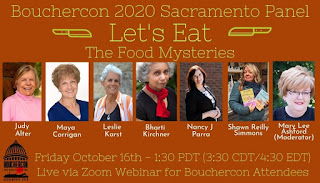 Posted by judyalter at 3:24 PM