Back in the world 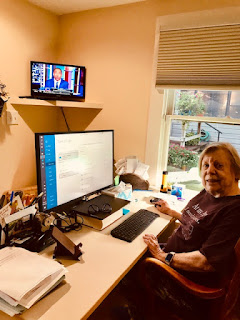 I’m back! I have a computer—a new Lenovo, a new remote keyboard, and a large remote screen. I’m in business again and so glad to be!

Several years ago, I had a TIA (mini-stroke) and ended in the emergency room. The doctors mistakenly said I didn’t have a TIA (later demonstrated by MRI) but was in what they called a state of altered consciousness. I’m not certain what medical textbook they got that out of, but the phrase certainly describes how I felt this past week. Without a computer, I was useless and didn’t know what to do with myself. I felt isolated from the world, though I tried to keep up on my cell phone and iPad. But I can’t type fast or accurately on those gadgets, so it was a losing game.

Worst of all I had projects and deadlines that required a computer. My online class on creating a fictional chef began last Thursday with me missing in action; on Saturday I was on a Zoom panel for the Boerne (TX) Book Festival—managed that on Christian’s computer. A calendar note popped up reminding me I had a deadline for a guest post about Saving Irene—I did a rough draft on Christian’s computer. Jordan was a magician and set me up on that with my email account and Word program. Wonder of wonders, when I opened Word on the new computer, that file was there. The internet world continues to amaze me.

This morning, in addition to going to church online I played catch up—answered emails, apologized to some for my absence and failure to congratulate on some good news, thanked my youngest son who spent three hours last evening setting all this up. I wouldn’t have had the faintest idea where to begin. I have been working on a computer since they first came into common use—probably the late eighties. Remember those ancient slow machines with two big floppy disks? One for the program and one for the document you were working on? So give me thirty-plus years, and I’m still techy challenged. I think it’s less me than the fact that technology changes so rapidly. And I’m glad it does—today’s streamlined computers are such an improvement. And in a year, my new one will already be dated!

The grocery list was a big frustration of my week of isolation. I keep a running list on my computer—with items for both households, at least for our dinners. Thursday Jordan had to go to the store with a list reconstructed from memory and as we planned meals for this week, she kept a list by hand. I’m pleased to say we got most of what was on last week’s list, and I’ll send a new order to Central Market tonight.

I had a grand time on the book festival panel, talking with authors Sarah Bird (Daughter of a Daughter of a Queen) and Elizabeth Wetmore (Valentine) about strong Texas women. My first Zoom panel so I was a little intimidated, but I found I felt quite at ease—more so than when appearing onstage in person—and plenty to contribute to the discussion. A wonderful hour. Thanks to Caren Creech of the Patrick Hearth Public Library for putting the program together—and most of the festival, I think. We got good response online from people who had watched it. Zoom is going to be a good thing for me, enabling me to attend meetings that, if they were held in person, I couldn’t make. So this Thursday I’m going to “zoom attend” the meeting of the Tarrant County Historical Society.

In the category of it’s always something, a critter—probably rat or squirrel—has died under the kitchen of the main house, and the odor is apparently unbearable. So in a sudden reverse, Christian is not fixing us supper—who wants to cook in a kitchen that smells that foul? So I’ve fixed chicken pot pie—my own recipe and one of the few things I cook that Jacob really likes. I caught him once scraping up the last of the sauce with a strawberry.

I am certainly looking forward to this week as a change from last. Cheers, everyone!

Posted by judyalter at 5:01 PM

Love that large screen, Judy; glad you're back!

Thanks,Becky. YOu have no idea how glad I am to be back!