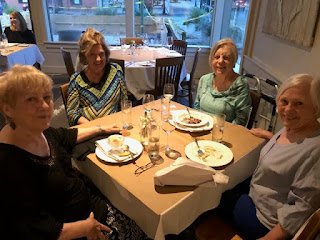 I love these ladies! We have been friends for at least forty years, probably more. Three of us are the divorced ex-wives of osteopathic physicians. In one of life’s little ironies, two of those men are deceased, while we party merrily on. The fourth woman is the widow of a physician all of us loved. We have gone our separate ways, sometimes for long periods of time, but then one or two at a time, we come back together again. For the last year or two all four of us have come together for dinner every couple of months. When one of them thanked me for once again organizing a get-together, I repeated what I often say: Friendships are like gardens. You have to tend to them and cultivate them.


We caught up on children and grandchildren. We rejoiced with one who has just had a major surgery and reassured another who faces surgery soon—signs of aging, I guess. We oohed and aahed over one whose son was moving back close to her and lamented other children far away. We talked of people we knew and missed. When one name came up of someone who’d dropped from our radar due to personal and health problems, someone said, “She should know that we still care about her.” Most names brought us happy memories, though there were a few snarky comments about some of the people in our shared past. All in all it was a joyful, happy evening.


We met at Ellerbe’s, where the service and the food are both fine. When they started to seat us on their second level, I suggested as politely as I could that their ramp was a bit steep for my walker. It took a little fiddling, but they found us a table downstairs. Our waiter was charming, took this picture of us, and let us linger over three courses of dinner—I never ever eat an appetizer, an entrée, and a dessert, but I did tonight. Actually I had two appetizers—one when others had their salad and one as an entrée. And  brownie as dessert. Result is that I am almost uncomfortable tonight—too rich, too good. One of those lovely evenings that leaves me happy with my life.


Speaking of tending friendships like gardens, there was gardening going on at our place this morning. Our neighbor had a mountain of mulch dumped in his driveway. After he had, as he said, mulched everything on his property twice, he asked what we wanted. The picture below is the best I 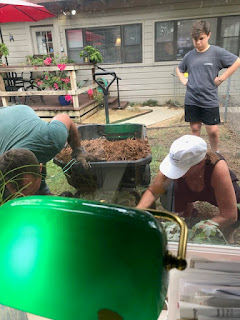 could do through my office window of the neighbor and Jordan mulching the bed under my window, under Jacob’s supervision (sorry about the green lamp in the foreground). Jacob did work harder at other times—I saw him spreading mulch and shoveling it into the wheelbarrow. That stuff smells so good—like the best parts of a barnyard. Far as I can tell, there’s still a mountain of mulch in the driveway next door—and the wife’s car is in the back yard, hemmed in by the mulch. Which I guess is all right because she is staying home with a two-week-old beautiful baby girl.


Menu items that recently struck me: last night on the menu at the Italian place where we dined, chocolate salami was on the menu. And today I saw an ad for kale candy canes—I don’t even like kale in salads, but I love salami. Not chocolate though. Two food adventures I’ll be skipping.


Blessed Sunday ahead, everyone.
Posted by judyalter at 8:33 PM