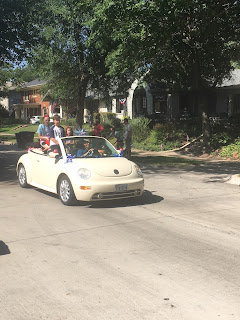 Loose ends—or as my professor/friend calls them, “brush fires,”—kept me busy all day. I was dealing with transferring some funds to a more conservative site which meant talking to Colin frequently and to the broker, hashing out details, reminding the broker that I have four beneficiaries, not three, and my estate is all planned. Then I had to set up an online account with the brokerage company—a nice young lady talked me through that.


Next on my list was what to do with my mother’s dressing table. Doesn’t sound like a big problem, does it—but it is. My brother has it, decided it doesn’t fit in their house, put it in the garage, but is reluctant to sell it. Yikes! Of course, I don’t want to sell it—it matches my bed and the marble-topped buffet squeezed into my bedroom. But there’s no room in the cottage—or wait. Is there? If I moved Mom’s sewing cabinet to storage and my childhood rocker, maybe it could go next to my bed. But it might crowd the room visually. I called and asked Cindy to measure it, having previously asked her to send a picture so I could share with the kids. She laughs at all this, but I don’t think she understands how serious we all are about my mom’s stuff. So, having done all that, Colin calls and says he might take it. That meant I had to figure out why I had the wrong email address for my oldest child—and re-send the pictures.


Besides, I had another problem on my mind to share with him, and he had momentous news of his own. More on all that later.


As I sat at my desk checking emails, etc., this morning, I was aware that I could hear Sophie breathing. You know that wet sound when a child is all stuffed up? That’s how she sounded. I went back and forth, trying to catch the vet between patients. Finally got him, and he prescribed a new medication that I will pick up tomorrow. Meanwhile Sophie seems some better, but I have seen these temporary resurgences before. I’ll get the medicine tomorrow.


My car is in the shop, mostly for cosmetic repair which really turned out to be repair of damage done by the environment, by commercial car washes, etc.  The shop owner who was detailing it called this morning and said he had to rotate the tires and get an oil filter for it. Then he called this afternoon to say the car has wheel locks and where is the key? I should know? I didn’t even know what wheel locks are, and I sure don’t have a key. Spent some time on the phone tracking down a solution but, as always with a VW, I landed back at the dealership. They will sell me equipment for removing the locked lugs and replacing them. “You can do it yourself,” a cheery voice said. Did she know she was talking to an eighty-year-old woman on a walker? But when I investigated further, asking about having them change out the lugs and rotate the tires, she began to talk about labor charges. Volkswagen is notorious for their labor charges, plus I would have to wait at least an hour and a half while the work is done, since I’m not mobile enough for their shuttle. I opted to pick up the parts and have the same mechanic do it. Please pray that I do not have a flat between now and then.


My left hearing aid won’t keep a charge. I’ve been experimenting with it for days, hoping to pinpoint the problem. I was to see the audiologist at 12:45 tomorrow—until I found out I wouldn’t have my car. I asked to reschedule. Then I found out I would have the car, albeit without tires rotated. I reinstated the appointment. And the hearing aid quit about one o’clock.


To cap the day off, I went to dinner with friends. The Tavern has absolutely the best hamburgers I’ve had in forever, and I enjoyed my meal and the companionship, though it was noisy. Until I realized I came home without my debit card. So add that to my errands for tomorrow.


My brain is still whirling, and I’m tired. No wonder.
Posted by judyalter at 6:43 PM