Pearl Harbor Day, a grocery list, and a dog 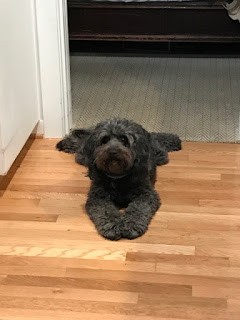 Roosevelt called it “a day of infamy” that will live in history. And yet today I saw relatively few mentions of Pearl Harbor Day, some seventy-seven years ago. I was too young to remember, but I was told the story more than once. I was playing on the kitchen floor while my mom cooked dinner, and my dad came home, stuck his head in the kitchen door, and announced solemnly, “The Japanese have bombed Pearl Harbor. We are at war.” For a veteran of WWI, as he was, the news was devastating. While others slowly grasped the consequences of war, those who’d been in the trenches in France and England knew immediately the horror that would follow. And yet, WWII would be a different war, with more efficient ways of killing men. Each of the two world wars were horrific in their own ways. We must never forget.


Rainy dull day today and chilly. I was glad to stay home and at my desk, putting off my run to Central Market for curbside pickup until tomorrow. I have been a holdout about grocery shopping, loudly proclaiming that I want to pick my own tomatoes. Megan uses a shopping service that lets her order as much as she wants, as often as she wants, for a minimal fee. I’m not there yet, but Jordan doesn’t want me to get in and out of the car with my walker unless someone is watching me—works fine when I meet friends for lunch or when I go to a doctor’s office where they send someone out to make sure I neither fall nor get mugged. But the grocery store has been a problem. I can hardly call Central Market or Tom Thumb and ask them to send someone to help me in. Still, Jordan has more demands on her time than taking me to the grocery.


Reluctantly I tried the new curbside pick-up at Central Market, and now I’m a fan. I’ve had no quarrels with the groceries I’ve gotten, and I find the people at curbside uniformly pleasant and helpful. Too often I call and add something at the last minute, and they willingly add it to my order.


But the big thing is that I am a much more cost-efficient shopper when I have the choice of items before me on the screen. Tonight, I realized that the brand of honey I usually get is two dollars higher than a comparable product. I compare cheeses, crackers, all sorts of things. Duke’s Mayonnaise, which I prefer because it’s not part of ConAgra, is less expensive than Hellman’s. And those good fresh spices—I can order an ounce and not pay eight dollars for a little jar of ginger that will go stale in my cupboard. There are some things the store doesn’t carry, and it’s not practical (or possible) to buy paper products there, so I keep an auxiliary list. But it’s much shorter.


The rain is not helping Sophie’s allergies, and the poor dear wants to be right by me when she doesn’t feel well. So I am treated periodically to coughing, throat clearing, and other less pleasant sounds. She’s psychic and considerate about my sleep and waits till I wake from a nap to jump up on the bed and thrust her face into mine. She paws at my hand until I scratch her head. I am always leery of one of her coughing spells—don’t want her spitting up on my bed. But nothing dampens the bond between us—she stares at me so intently, I know she’s telling me she loves me, and I assure her I love her.


Life is good with a dog.

Posted by judyalter at 4:19 PM