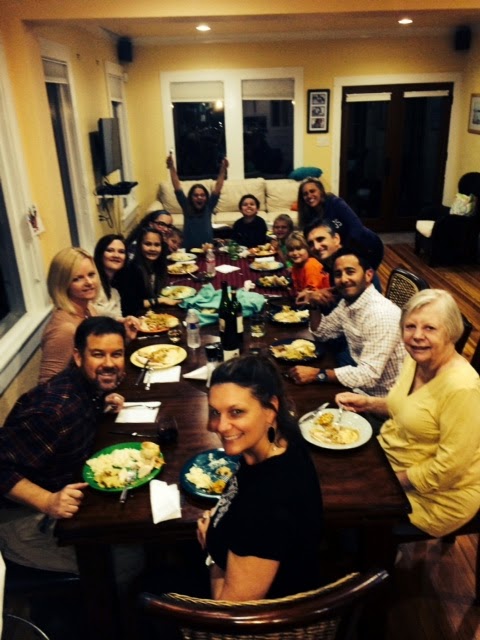 All day these words ran through my mind, "Come ye thankful people﻿, come/Raise the song of harvest home/All is safely gathered in/Ere the winter storms begin." This hymn of thanksgiving was particularly appropriate today, as is the other one I kept hearing in my mind: "We gather together to ask the Lord's blessing/He chastens and hastens, his will to make known." Last Sunday in church I started off singing that one heartily, but the second line threw me--the hymnal has changed the words. I wanted the words imprinted in my mind since childhood. Maybe that's why it's been so much on my mind. 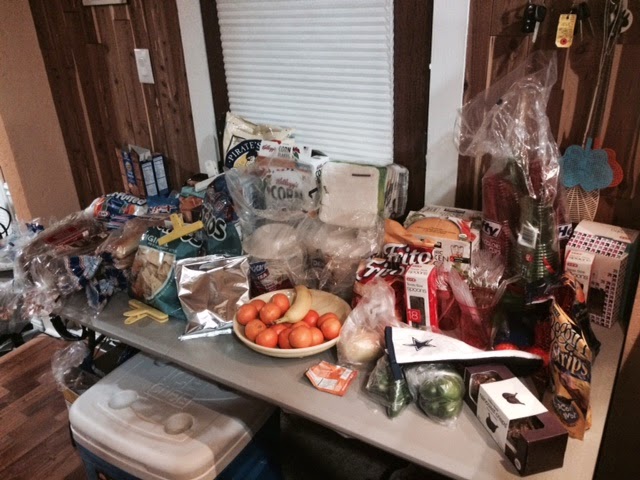 I have much to be thankful for tonight. My entire family is with me--eight other adults and seven children. We make a formidable, noisy crew, and it takes a lot of food to keep us going. Here's the snack table. We had enough food to feed two homeless families--and I wish we had.
Son-in-law Brandon complains that the civilized time to eat Thanksgiving dinner is 2:00 p.m., but his in-laws never eat until five-thirty. I thought for a bit today he might get his wish--everyone wanted to be through for the TCU game at 6:30. But, alas, it was 5:45 before we all gathered at the table.
We assign dishes to everyone, with the result that the kitchen is a beehive of activity and periodically the order goes out for everyone not directly involved in cooking to clear the area. My girls are all good cooks, but they are each squeamish about turkeys--so it falls tome to take out the innards, throw away the bloody bags, etc. As we often do, we roasted one turkey--with herb butter, which made delicious gravy--and fried one. The boys love to fry turkey but I mostly prefer roast. It was all delicious--I am responsible for gravy, and Megan said it was exceptionally good this year. They like gravy from pan drippings but in recent years I augment it with gravy from Central Market. But mostly the girls do the cooking and I help where I can--a reverse from years ago.
After dinner we sat around a fire in a pit outdoors, and the two guitarists among us--Brandon and his son Sawyer serenaded us with everything from Willie Nelson to Christmas songs. Granddaughter Eden said it's her favorite time of the year--because it means it's now the Christmas season. She's delighted that her older sister now has an after-school job because she thinks it means she'll have more money to buy Eden Christmas presents.
There's a prayer from the Book of Common Prayer that I can never commit to memory but it has to do with asking the Lord to be with those who weep and worry and those who wait. I know that I am so blessed that I can't even begin to talk about but I wish the impossible--peace, happiness, food, shelter for everyone. It's potent request in these times.

Posted by judyalter at 6:16 PM