Do you talk to your dog 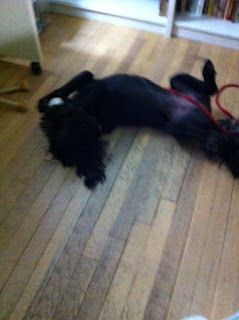 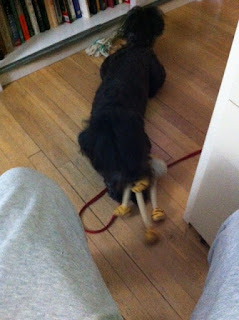 Sophie the irrepressible Bordoodle turned one year old Friday. She actually has calmed down a lot, but now people are saying, "Wait till she's two!" Well, darn, I thought I would have her tamed and reasonable by one. Training Sophie--hmmm, is that the title of a book?--has been a long and sometimes difficult process. For economy, I took her to the PetSmart training classes rather than hiring the personal trainer I used with Scooby. PetSmart training works really well for some people, er, dogs. Not Sophie. I suppose I wasn't consistent about doing it at home, and getting her there got to be a problem--she's so wild once she gets off my property that I am afraid of being pulled down. Sophie will not be getting long outdoor walks, unless Jordan gives them to her.
Eventually I gave up on PetSmart, but she retains a lot of good manners from that training--sit, down, drop it, leave it, etc. But I called Kenny, of Home Dog Training, for larger issues such as jumping--my left arm is always a mess of scratches and marks where she jumps when I'm at my desk. Kenny's big dictum is "Don't talk to your dog while you're training. Only commands." Come on, I want to carry on conversations, tell her she's being adorable, ridiculous, spoiled, whatever. Yesterday, our third and apparently last lesson, he finally got through to me by asking if I saw how she listened to him but not me. "She tunes you out, because she hears you  talk all the time." Made sense, and I'm trying hard, though I have ocasional lapses. I am allowed to say "Good girl," so I do that often. And I play with her and love on her--just no cooing, please.
The first picture is Sophie loving having a new toy; the second is Sophie busily destroying said toy which no longer squeaks.
We're working on stay and come--she did "stay" beautifully with Kenny here; not so much with me. If I hold the leash, she does well; If I let go of the leash, she stays while I walk away, then bolts when I start toward her. I haven't tried "come" on my own yet--she's tired of Pupparoni, and Kenny suggests a tiny tiny pieces of cheese, so I'll buy those awful Kraft slicees. But I figure we have to master "stay" first. What with Jacob, both dogs, yoga, plants to water, and other chores, plus training Sophie, it's no wonder I hardly have time to write.
I hard a small part in a nice dog story this weekend. Two Facebook friends are dog rescuers--they post heartbreaking pictures of dogs that must be rescued or they will be put down. Yesterday there was a miniature schnauzer--surrounded by newspapers, so that I wondered if he'd been destroying them. I shared the photo on Facebook as I do with many rescue dog pictures, and friends of mine saw it and decided they wanted him. He had to be "tagged" by seven this morning, so they emailed, got word late last night they could pick him up today, although they were warned he'd been there so long because he was "unpredictable." They picked him up, named him Jasper, and took him home to a menagerie of dogs and cats where he happily fit right in. I am so grateful to have had a small part in this rescue, and I hope to keep up with Jasper.

Jasper before rescue
Posted by judyalter at 7:34 PM