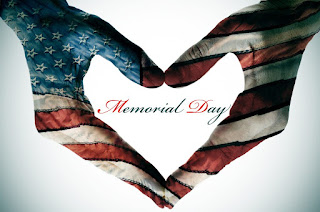 Someone on Facebook posed a question about why we wish people happiness on a day when we honor and remember members of the armed service who have given their lives in defense of our country. I think it’s because those men and women died to preserve our way of life, and nothing speaks more to our way of life than the picnics, cook-outs, and celebrations that mark this day. Yes, we stop to honor, we visit gravesites, but we also celebrate—and I can imagine that pleases those who served.


I saw a touching story on Facebook today about an eighty-nine-year-old Dutch woman who has been tending the graves of two American soldiers in a cemetery near her small town for seventy years. She visits the graves twice a year—on Memorial Day and on the anniversary of her town’s liberation from the Nazis. In recent years, she has been in touch with the families of those fallen soldiers from WWII, and one family has even visited the town and the cemetery. Such stories reinforce my faith in the good of humanity, a reaffirmation sorely needed in these days when so much seems bent on destroying all that is good about the American way of life.


My Memorial Day outing today was lunch/brunch with my local family. They’ve been at the golf tournament all weekend, so I was delighted to have a meal with them. In retrospect, I wish I’d ordered brunch, but I didn’t. I asked for tortilla soup which was too hot and too spicy—good, but oh my!


Jordan mentioned that they were going to Denton, where Christian’s sister lives, and I heard the word “fishing.” I assumed Jacob was going fishing. Not so. They were going to a fish memorial service. Jacob’s two girl cousins, younger than he, each had a fish that died, and they were going to have a service. I yelped in astonishment that the family from all over the county had been asked to drive to Denton for this momentous occasion, but Christian hastened to add it was really a Memorial Day celebration, a cook-out. Later, Jacob got to speculating on whether or not the girls had saved the fish corpses. “Are you wondering if it’s a funeral or a memorial service?” I asked, and he grinned. The fish, by the by, were Flash and Cobra. I am happily at home, planning to make a super sandwich out of part of a salmon burger and lettuce, tomato, bacon and mayonnaise.


Once again, a day filled with excitement. Just spent half an hour on the phone with the bank—those poor people have to work on this holiday—trying to straighten out a payment that has not gone through twice. Maybe three times is the charm.


I’m surprised at the people who have to work today, though I remember it was only toward the end of my tenure at TCU that the university declared Memorial Day a holiday. Today, the lawn crew came and mowed, because Monday is their day. Of course they came just as I tried to sneak a nap and not only did their mowers and blowers wake me, but Sophie had to let them know loudly that she was protecting me.


I can hardly stand this frantic pace of life. Happy Memorial Day, everyone!
Posted by judyalter at 4:25 PM