Today was a day to stay inside—cold and rainy. I had to get out to do a quick drop-off errand first thing in the morning and then came gratefully home. But the cottage seems chilly to me tonight, and I have on several layers. And I’m longing for a fireplace. Sophie is undaunted by the cold and has chosen to spend much of the day outside, which aggravates the chilliness in the cottage since I leave the door slightly ajar, so she can come in. My rationale is it saves me from getting up but that’s not true—she pushes it open more widely when she comes in, and I have to get up to close it. But then, if that’s the worst problem in my life, I’m pretty lucky.


Just learned that grandson Ford was the Sixth Grade Student of the Week last week at his school in Austin. Go Ford! I couldn't crop the picture, which was grabbed from a school publication, but I do want to report that Ford was wearing a TCU sweatshirt. He's my TCU kid!


Last night I made a big pot of sloppy Joe, because Jacob loves it and his eyes lit up when I said I would make it. Mine is a bit different. It’s actually a recipe for a wine casserole that I got from an old cookbook called, “A Jug of Wine.” My kids grew up on it, and I’m sure you’ve heard me tell about the time Megan made it for her family. Brandon tasted and said, “It’s good, but it’s not sloppy Joe.” She wrote me sarcastically that she guessed she was the only one who thought red wine was an essential ingredient of sloppy Joe.


The “girls”—June Bug and Cricket—certainly thought they’d like some sloppy Joe last night. 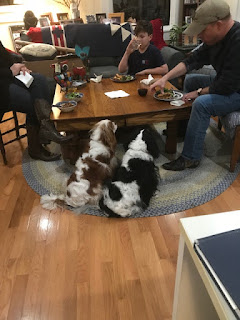 How sad. I’m watching a news clip on teaching high school students to save lives in case of a mass shooting by staunching the blood. Makes me want to put my grandchildren in a bubble—or maybe move all of us to Scotland.


I spent much of the day reading about Clara Driscoll, so-called Savior of the Alamo. Actually, I think Adina De Zavala was the real savior, but she had the passion while Driscoll had the money—and got the credit. The way of the world. But I keep learning fascinating bits as I research this book. I knew that Clara built a hotel, among her countless projects, and just assumed it was the Driskill in Austin (didn’t even think about the different spelling of the name). It seemed possible. After all, she and her husband built a magnificent mansion, Laguna Gloria, in Austin and lived there for some years. Today it is the Austin Museum of Art.


But of course, the different spellings finally got through to me. It seems Austin’s Driskill Hotel was conceived and built in1886 by Jesse Driskill, a cattleman. Clara’s hotel is the Robert Driscoll Hotel in Corpus Christi, overlooking the bay, and built in tribute to her brother after his death. Fascinating history and I’m enjoying it..


Now for a quiet evening, eating leftovers and reading a juvenile novel.

Posted by judyalter at 5:58 PM