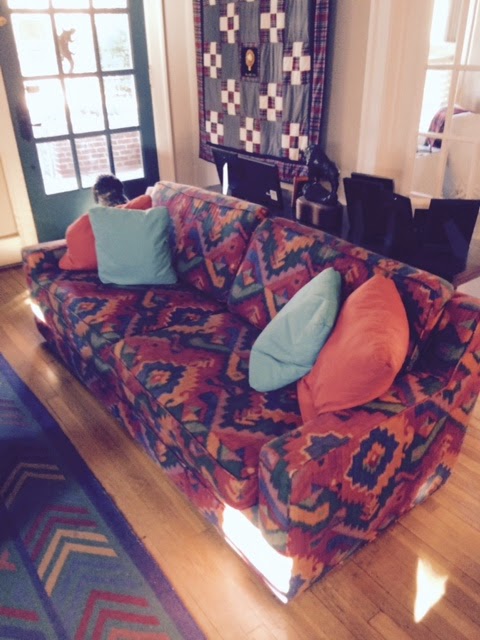 My current couch--recover? replace? forget it?
I have lived in my house twenty years, seen four children grow and leave home, and welcomed seven grandchildren. In that process, my furniture has taken a beating--I swear I never let my kids jump on couches and beds but some of my grandchildren seem to think that's what they're there for. Inertia has held me back--I couldn't get a fabric I like as well for the living room couch, those barrel chairs are a little worn but not bad, it would cost too much.
A couple of factors got me thinking about sprucing up the house. The grandchildren no longer need a playroom--their play is not stuffed toys and a huge hobby horse and things like that--we sold most of it at the last of Jordan's garage sales (oh, how I wish it were the last but I guess I meant most recent). I did hang on to a trike that is at least 80 years old and obviously repainted with loving hands. It has a huge hole in the solid rubber front tire--I can still hear three-year-old Maddie when she looked down and said, "There's a hole in my tire," drawing out the word hole in dramatic fashion. It was given to me by dear friends, now gone, when their grandchildren outgrew it but it had belonged to the grandfather and probably someone before him. Sentimental value. Meantime, my grandchildren's idea of toys is mostly iPads and X-Box or at least cell phone.
At the same time, my grown kids said if I want them to visit often, I need a place for them to hang out (I am blessed that they always want to be together whenever possible), so I'm converting the playroom into a sunroom--it gets marvelous sun all day long and much of the year is downright hot in the late afternoon. Eleven-year-old Eden (who is going to be a designer, architect or fashionista--I don't know which) did drawings, and she was the one who envisioned a 45" TV (ordered and to be delivered Monday) in the middle of the bookcase, a couch across from it, and comfortable chairs. Plus we'd take the doors off the storage area below, add adjustable shelves, and showcase the collection of my own books that are now tumbled in there. This would seat eight or more, and for the overflow, there's a round oak table with four sturdy chairs and a few straight chairs with cane seats--hard to protect from children.
The first plan was for a sectional which sounded fine until I started looking at sectionals--I wanted something bright until I figured out a red sectional would overwhelm the room. Since I hate shopping I did all my browsing online. I decided if  I was updating the look, I should have the living room couch reupholstered. Today Jacob suggested putting the current couch back there and buying a new one. We decided it sounded good, but we already have one objection already--the current couch isn't comfortable and we should stick with sectional.
Then my neighbor said the only way to do things was to empty the living room and start over--rearrange but not discarding. I sort of like the way my living room is arranged right now. Truly, my head is spinning.
Posted by judyalter at 7:39 PM